We at AwF are pleased to inform you that Dr Madhav Shrestha, who co-manages our AwF-Nepal project, has received an award from the Prime Minister of Nepal for his continuous dedication and contributions to Agriculture / Aquaculture Development in Nepal. Dr Shrestha was recently promoted to full Professor at the Institute of Agriculture and Animal Sciences (IAAS), Chitwan, Nepal.

Professor Shrestha, an Alumnus of the Aquaculture and Aquatic Resources Management (AARM) program (MSc’ 92, PhD’94) at the Asian Institute of Technology (AIT),  has served as a collaborative partner and played a critical role in launching several successful AARM projects in Nepal. The following are the major collaborative projects launched over the past decade:

In addition to these, he has been very successful in winning funding for a number of projects from national funding agencies and successfully launching them for the benefit of local communities throughout the country. He was also the key person who organized a national symposium on ‘Small-Scale Aquaculture in Nepal’ during 5-6 February 2009. 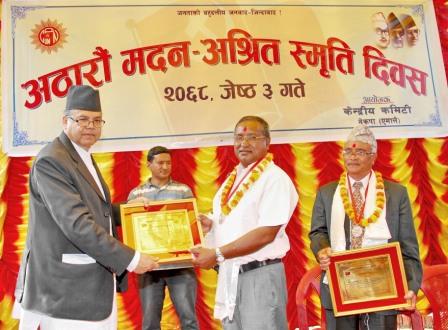