The overall conference, which attracted about 2,500 delegates, emphasized the need for the whole industry to take a more strategic approach to expansion with the theme ‘Positioning for Profit’. In the AwF session we attempted to show how aquaculture plays a role in alleviating poverty and malnutrition (which is a clear profit for society) through AwF aquaculture activities. It is something of which everyone who is connected with AwF should be proud.

The Session was jointly chaired by AwF Founder, Michael New O.B.E, and Roy Palmer. Michael led the presentations with a founder’s take on AwF’s first ten years, followed by Eddie Pantanella talking about the key role of women in integrated aquaculture in Myanmar – a great story which encompassed other farming activities besides aquaculture. 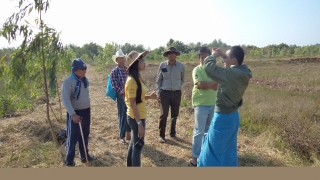 Proud and passionate Myanmaresian, May Myat Noe Lwin (winner of WAS Magazine award earlier in the year) gave a strong presentation about how AwF can engage with Myanmar – as was mentioned by Eddie, so much depends on the engagement of women.

After the tea/coffee break the session continued with WAS-APC Director & AIT Coordinator, Aqua-Internship & Training Program, Ram Bhujel presenting on ‘Nepal’s model of rural aquaculture development’. Ram strongly pointed to the importance of AwF’s engagement in Nepal as being pivotal in the country’s move to aquaculture operations – an issue that AwF should be very proud of.

WAS Magazine Editor, John Hargreaves, spoke of his involvement in volunteering in USAID/AwF activities and explained the valuable learning and understanding that people like him can obtain by their involvement in such projects. Former WAS & AwF President, Professor Kevin Fitzsimmons (who manages the ‘Farmer to Farmer Program’ at University of Arizona) and Antonio Garza de Yta (President of WAS-LACC) highlighted the importance of AwF strategies in Africa and Latin America.

The session was concluded by Roy Palmer detailing how AwF will approach its second decade with a Q&A session enabling people to bring forward ideas and concepts for the future.

NOTE: AwF ‘Farmer to Farmer’ completed project reports are detailed at http://www.aquaculturewithoutfrontiers.org/projects/completed-projects-and-field-activities/ and are the subject of FARMD Featured Topic on Aquaculture Risk Management at https://www.agriskmanagementforum.org/.