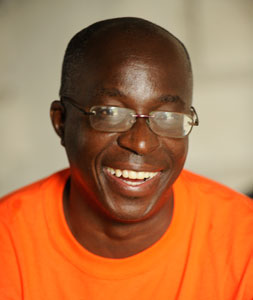 Ivory Coast native Valentin Abe got his master’s degree in fisheries at Auburn University in 1991, completed his Ph.D. there in 1995 and was doing postdoctoral research in the Department of Fisheries and Allied Aquacultures when two of his faculty mentors volunteered him to go to the impoverished, politically volatile Caribbean country of Haiti on a six-month project to set up a model fish farm.

He arrived in Haiti on April 2, 1997–and in Haiti he has remained, fully dedicating himself to establishing a viable fisheries and aquaculture industry there.

Today, Abe and the highly successful tilapia hatchery he has built from the ground up are allowing Haitians not only to feed their families, but also to increase their income two- and threefold.

In 2010, Time magazine recognized Abe for the dramatic difference he makes in the lives of Haitians by naming him to its annual list of the 100 most influential people in the world. He was nominated for the honor by former U.S. President Bill Clinton, who, on a visit to Haiti, met Abe and witnessed his tremendous impact in the economically developing country.

Read about his work in Haiti.