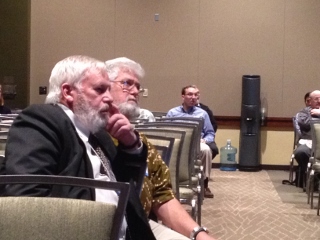 Co-Chairs Antonio Garza d’Yta and Roy Palmer welcomed everyone to the session and opened with Gleyn Bledsoe presenting “Aquaculture as a Successful and Sustainable Instrument for Affecting Economic Recovery and Development in a Post War Environment”.

What a harrowing story this was highlighting how women, children and the poor/needy are always the most disadvantaged in these circumstances. Additionally the stories of survival from horrific injuries to re-build a new beginning were quite stirring.

Gleyn ended with some bright hopes for the future in Sri Lanka as you will see in the presentation, and indicated that entrepreneurial individuals would likely succeed in the long run. A similar story unfolded from Joseph R Sullivan in his presentation regarding Liberia, entitled “Bootstrapping Aquaculture from Production to Marketing in Developing Nations”.

Joseph spoke of some of the basic elements from hand-sexing for all male-tilapia to pituitary spawning of catfish; focusing on novel feed components that are nutritious but not in demand for human food; increasing the quality of the fish sold as that creates higher prices; and how Co-ops can be good (helping to get the equipment/supplies individual farmers can’t get) and bad (creating division of labor/sectors).

Angela Caporelli, looking to expand her horizons in aquaculture by being engaged in the current ballot to be the next WAS Secretary, gave the audience a terrific overview of her visit to Kenya as a volunteer for AwF through the USAID program.

Angela went to Kenya with Marty Riche and they worked in the Rift Valley and Coastal Provinces. As you will see in the presentation, Angela gave a terrific overview of the situation and prospects for the area.

One of the aspects, highlighted in Angela’s summation that we will be following through on will be the need for an in-depth training program including all aspects of aquaculture and a well-trained extension person to start aquaculture development in the area.

There were two presentations about our first Aquaculture Learning Centre (ALC) in Mexico. Scott Lindell gave a talk on the work that he and Rick Karney did when visiting Mexico on the USAID program administered for AwF through Kevin Fitzsimmons/University of Arizona. A bright future was suggested for the Oyster program being developed through the ALC, so onward and upward in that direction.

Antonio spoke in general terms regarding the future of the Mexican ALC and suggested that terrific prospects existed with Government organisations such as CONAPESCA and INAPESCA, and through alliances with WAS-LACC, GILLS and RAA (Red de Acuicultura de las Americas).

Additionally, Roy spoke about the AwF meeting that was held on Sunday 9 February and gave a run down on future activities. These will be reported in other communications.