AwF board members meet our Patron in Phuket

AwF board members meet our Patron in Phuket

It is a tradition that the AwF holds its board meetings during global aquaculture conferences where sufficient AwF Directors are present on other assignments. This enables AwF to maintain its board costs at zero. Earlier this year the board met in San Diego, USA, during the World Aquaculture Society (WAS) meeting World Aquaculture 2010.

On 23 September 2010 the AwF Board met again in Phuket, Thailand, during the Global Conference on Aquaculture 2010 (GCA2010) organised by the Network of Aquaculture Centres in Asia and the Pacific (NACA) and the Food & Agriculture Organisation of the UN (FAO).

Since the opening keynote speaker at GCA 2010 was our Patron, Professor M.S. Swaminathan, FRS, this gave AwF Directors from Australia, Belgium, India, the UK and the USA an excellent opportunity to discuss our activities and future plans with him. Board members also had a similar opportunity to meet with the Co-Chairs of GCA2010, Jiansan Jia (Chief, Aquaculture Service, Fisheries & Aquaculture Department, FAO, Rome) and Sena de Silva (Director General of NACA). 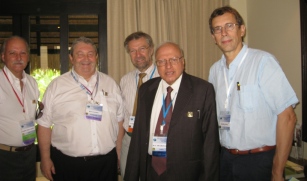 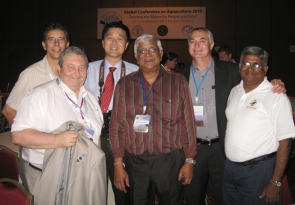