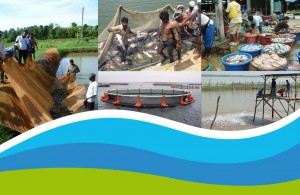 More than 50 per cent of the world’s food fish will come from aquaculture, making it a crucial method to reduce poverty and combat food insecurity, said a United Nations report released today, while calling for governments to step up their efforts to support this practice.

Aquaculture, which involves cultivating fresh water and saltwater populations of fish under controlled conditions as opposed to catching fish in the wild, is the world’s fastest growing source of animal protein, growing by more than 60 per cent between 2000 and 2008, from 32.4 million tons to 52.5 million tons, according to the report.

“With stagnating global capture fishery production and an increasing population, aquaculture is perceived as having the greatest potential to produce more fish in the future to meet the growing demand for safe and quality aquatic food,” said the report, World Aquaculture in 2010.

The report, released by the Food and Agriculture Organization (FAO), states aquaculture has played an important role in reducing poverty in many parts of the world. However, it says it has not grown evenly throughout the planet.

Eleven out of the 15 leading aquaculture-producing countries are located in the Asia-Pacific region, and in 2008 they accounted for 89.1 per cent of global production. Most remarkably, China alone contributed to 62.3 per cent of production in the region that year.

The report also states that there are marked differences in production levels and types of production. China, Thailand, Vietnam, Indonesia and India for example, lead production levels of shrimp and prawns, while Norway and Chile produce mostly salmon.

The report warns that governments need to invest in aquaculture so they can continue to enjoy its benefits and address the challenges that are linked to this practice.

“Achieving the global aquaculture sector’s long-term goal of economic, social and environmental sustainability depends primarily on continued commitments by governments to provide and support a good governance framework for the sector,” the report says.

Key concerns regarding aquaculture include quality and safety standards, traceability, certification and eco-labelling. In addition, aquaculture faces major challenges due to climate change and the economic downturn in many countries, which could particularly affect small producers in Asia and Africa, where they make up the backbone of the industry.

The report calls for governments to increase their efforts to assist small-scale producers by organizing them into associations and through the promotion of better management practices to ensure the industry can continue to meet the global demand for fish.

The full report, together with regional reviews presented at Global Aquaculture Conference held in Phuket, Thailand in 2010 can be found by clicking here.