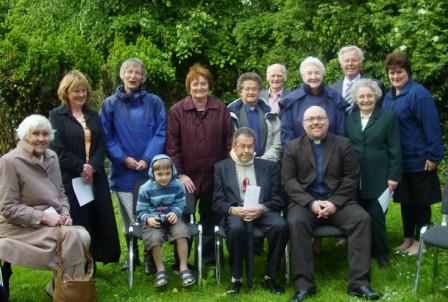 AwF (UK) Director Scott Peddie (sitting, far right) with some of those who attended the presentation and donated to AwF

AwF (UK) director, Rev. Dr. Scott Peddie, gave a talk on aquaculture and the work of AwF to a number of interested individuals at Dromore First Presbyterian Church in County Down, Northern Ireland on Wednesday 9th June. Commenting on the event, Scott said that “at the outset, most of the audience admitted that they had only a vague idea of what aquaculture actually was, never mind its role in alleviating poverty in some of the poorest parts of the world. However, by the end of the presentation people were clearly very impressed by the projects undertaken by AwF and the potential to do more if the resources were available.”

A collection taken at the end of the presentation amounted to £ 135. Not only that, some of those present at the meeting indicated that they would like to raise money for AwF projects in the future. For his part, Scott looks forward to giving more of these presentations in churches, schools and community groups in the near future.